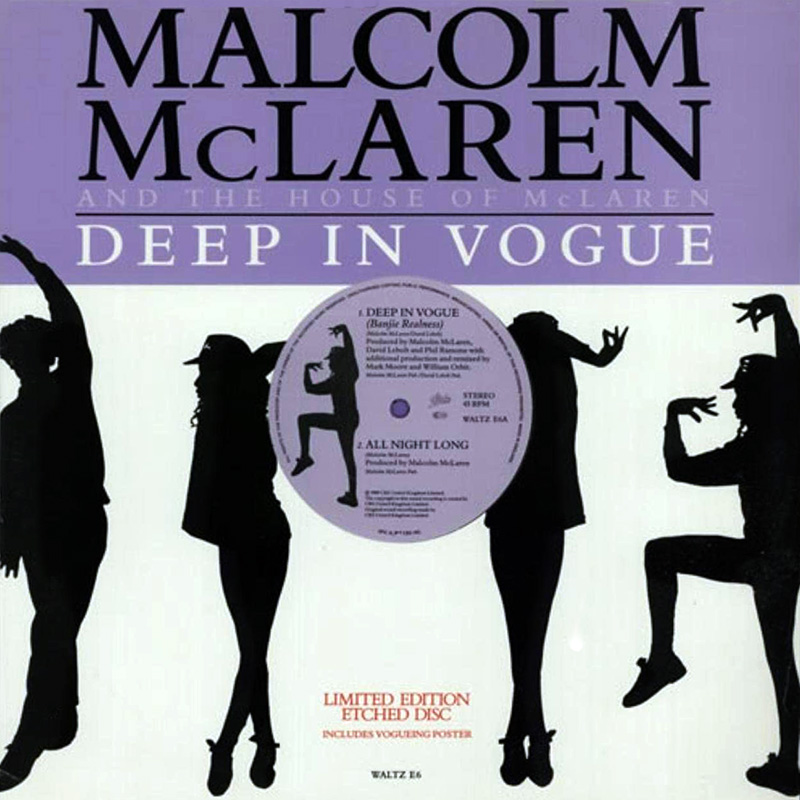 I have been criminally neglecting my website for well over a year now. Guess I just got in the habit of posting on my Facebook page, the Mark Moore/S’Express page and on Instagram. Well there’s no excuse now that we are in second Lockdown in the UK – so here’s a round up of a few select items. How you managed without these I will never know. (Part 1 of 4)

Thought I’d mention the MALCOLM MCLAREN ‘Deep In Vogue’ track that William Orbit and I worked on. Both Malcolm and Willi Ninja flew over to William’s studio in the UK to put down additional vocals for us. On the first day Malcolm just told us stories about everything from the The Sex Pistols to dating Lauren Hutton in L.A.. On the second day I had to throw him out of the studio just so we could get something done. Malcolm casually gave us some VHS tapes of rushes from Jennie Livingstone’s yet to be released documentary Paris Is Burning and we got to work sampling the fuck out of them. Then some extra vocals from Malcolm and Willi were added as we wanted it to sound like a Malcolm McLaren record and none of Malcolm’s vocals were on the original demo. Malcolm told us he had no idea what a Malcolm McLaren record should sound like. We told him that it had to have him talking, ranting or shouting over it.

Once finished, Malcolm loved our mix so much that he binned his original version (which to be honest sounded like a cruise ship, cabaret band playing ‘Love Is The Message’ – I still have a cassette of it somewhere) and put our version out – first as the b-side of his ‘Waltz Darling’ single, and then later, globally re-released as an A-side. We also did another slightly different version (using more of the live parts from Malcolm’s binned version) which Malcolm used for the ‘Waltz Darling’ album.

In the US ‘Deep In Vogue’ was always an A-side and it went to number 1 on the Billboard dance chart (prompting the global re-release and upgrade to A-side status). That naughty girl Madonna released Vogue a short while after.

Philip Sallon got Malcolm to do the launch party at the Mud Club at Busbys (Charring Cross Rd) in the UK. Malcolm, Willi Ninja (what a lovely guy) and a few other dancers flew over but Willi had caught a terrible bout of flu. Nevertheless he performed and walked the performance runway like a fierce rulin diva and brought Voguing to the UK. What a trooper!

Malcolm had also been at the opening night of the Mud Club 6 years earlier in 1983 (when it was at the Subway Club in Leicester Square) where he gave barn dance lessons to a mixture of Buffalo boys/girls, post-new romantics, post-punkers, proto-hip-hop kids, new-wavers, gender-benders, goths, funkabillies and rockabillies. The music he used was his Trad Square Dance version of his track ‘Buffalo Gals’ and it was one of the most hilarious, laugh out loud spectacles I’ve had the pleasure to take part in.

So good to hear ‘Deep In Vogue’ being played on Season 2 of Pose and to hear the cast talking about, “… a British entrepreneur called Malcolm McClaren is looking for dancers!” Both Malcolm McLaren (in spite of his wicked ways – I always found him likeable and very human – I’ll talk more on this soon) and Willi Ninja are deeply missed.

Love the new Vivienne Westwood shop display. I see she still has great taste in music (Spot the S’Express cover!)

S’Express on Xmas Top Of The Pops

A Happy Festive season to you all! Hope you are having a great one!

I totally forgot that BBC4 were showing the Xmas Top Of The Pops 1988 with S’Express featuring at the start of the show. You can now watch it on iPlayer.

This is when the BBC banned any song that mentioned Acid and decided to censor the start of Theme From S’Express because of the ‘Enjoy This Trip’ bit. You can see Gordon Matthewman, our trumpet player scrambling to get in position because the record started without the intro. Check out the ending – you can see Michelle sit on the stage after she finished singing in a sulky strop protest. Hilarious!